Quattre has now completed a trip around the world! She accomplished something rare for the year 2020, but thanks to Kwatta’s ‘borderless theater’ it wasn’t a problem. The Jabber language, both experienced live and comprehended by children worldwide thanks to the many international Jabberbabble shows (China, Egypt, Ireland, etc.) is also the language of this web series! And Quattre is of course a Jabberbabble character who in fact completes a sequel to the actual play. Those who’ve seen Jabberbabble will know what that means.

Before the Summer, Quattre visited a dozen artists across the globe, who were in lockdown. Like most of us. They had to perform and rehearse in their own living rooms. Thanks to Quattre, we had the chance to take a look at these talented people from Australia, New York or Caïro: some singing, some dancing and even some acting!

Right before and after the Summer holiday we showed Quattre’s adventures in classrooms of different places around the world, which we also provided with some fun educational challenges (especially important in these dull Covid times!). Some of the classrooms also wanted to sing along with the Jabberbabble-chorus, which we ended up calling ‘Tutti Klinge’. At the end of the series, they form a wonderful ‘world choir’ along with Quattre, which is the best ending for this series we could have imagined. And as we know, Quattre will later take these experiences to the Jabberbabble-stage.

You can also sing with us! Send us your singalong video via marc@kwatta.info or tag Kwatta in TikTok (@tgKwatta) ! 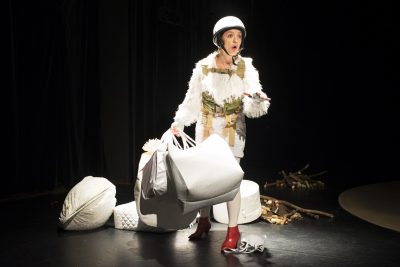